This past week, among all the pilgrimage preparation I've been doing, I have also been working on a new set of ogam feda. The last set I made were of paua shell. These are made of moss agate. The material is much harder, so I had to get different bits for the dremel in order to engrave the stone. The tips wore out much faster than I was used to, so I had to pause in the middle of everything to go and get new bits, which took a couple of days.

This was a much less involved ritual than last time, where I did a 20-day series of rituals and made three each of the same letter every night. The process was exhausting but very rewarding. My experience this time was a little spottier because of technical difficulties, but once I got past the hurdles, I very much got into the right headspace for the work. Offerings were made, chants were sung, and the whirling dremel bit against the stone lit them from within like sparks of fire. 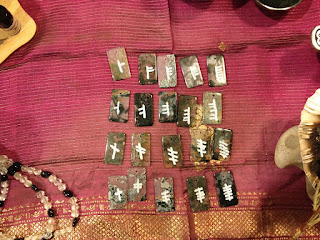 This is a photo of the full set on the altar cloth, before I had consecrated them and cleaned up the edges of the engraving from the paint pen. 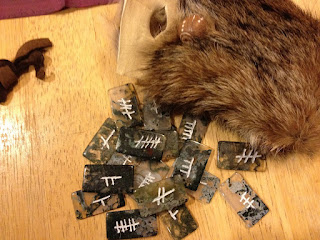 This is the set with the bag I'm keeping them in, made by my friend Lupa of The Green Wolf.

Moss agate, to me, is an Airmed stone. Airmed is an Irish goddess most closely associated with herbal healing, daughter of Dian Cécht, sister of Míach and Octriuil, and of Cu and Cethen and Cian, which makes her Lug's aunt. Airmed is the one who harvested and sorted the medicinal herbs growing from Míach's grave after he was killed by Dian Cécht for restoring Nuadha's flesh arm to him. The hornblende or chlorite inclusions in clear chalcedony are reminiscent of moss or the branches of trees, in greens, brown, or red, with white streaks also a part of its composition.

Magically, it's a stone often associated with gardeners, so its potential association with Airmed seems fairly logical, as these things go. I keep some on her altar, along with a little moss agate bowl for water and offerings. This ogam set was created and dedicated to her, for use in healing work. As part of the ritual for consecrating the stones, I traced the engraved letters with a knife of a deer bone blade, with a bear bone handle, also made by Lupa and gifted to me a year or two ago.

Given the sporadic nature of the work on this set, I was concerned that it might have had some energetic effect on the ritual, so after everything was completed, I pulled one fid to determine if all was satisfactory. The fid I drew was tinne, the bar of metal, signifying mastery of one's craft. I wouldn't say I'm terribly masterful with engraving, but at least the ritual and the work were acceptable to the goddess in question. The fid engraved with tinne has a small red inclusion that looks like a tongue of flame in it, which I thought of as the spark of creativity when I was deciding which stone to use for each letter.

The process itself takes a toll on my hands; I have fibromyalgia, so too much hand work, whether it's typing or crafting, makes my hands and arms hurt. They've been in a somewhat delicate state lately because I've been doing so much work at my computer, but I'd been holding onto the stones for this ogam set for several years now and last week they finally grabbed me and said that the time for it was now. One doesn't generally refuse that sort of call to ritual, so I went into it despite knowing I was going to hurt more afterward. I'll deal with it later, when I'm done typing up this entry.

One of the places we'll be visiting while on pilgrimage is Heapstown Cairn in County Sligo. It's a site associated with the Second Battle of Mag Tuired, and said to be the mound beneath which the Well of Sláne is buried. This is the well that was tended by Dian Cécht, Airmed, Míach, and Octriuil, where the slain warriors of the Tuatha Dé Danann were immersed and rose from the dead, renewed. The warriors of the Fomoire, seeing how the physicians were raising the dead, filled the well with stones and buried it so that they would not have to keep facing the same warriors over and over again in the battle. As part of my pilgrimage, I'll be taking this set of ogam feda with me to that site, and doing a blessing of them there, dedicating them to Airmed on her own ground, as it were.

There's so much happening with this pilgrimage and the subsequent trip outside of Ireland. So many of my deities are central to it. It's incredibly exciting and I'm very blessed to be able to do this. The pilgrimage itself currently has either seven or eight of the twelve openings claimed. If you'd like to come along, please do pick up the information packet and get in touch with Vyviane very soon! I hope I'll see you in Ireland!
Posted by Erynn at 11:51 PM